Four new species of bats were recorded recently during a bat survey at Yeovil Country Park, including the Barbastelle bat, one of Britain's rarest mammals.

Two Barbastelle bats, the rare Nathusius Pipistrelle and the more widespread species of Natterers, Soprano Pipistrelle and Brown Long-eared bat were recorded, bringing the number of bat species up to nine at the Country Park; over half the species found in Britain.

The bat survey took place on Friday 5 October and Rangers at Yeovil Country Park hosted volunteers from Somerset and Dorset Bat groups as they carried out the surveys in Ninesprings. The volunteer bat workers from these groups are working under licence from Natural England to survey bats across Somerset and Dorset.

Becky Russell, Community Ranger, who attended the bat survey session said, "It's very exciting to discover rare Barbastelle bats in the park. They are amazing creatures with large ears and dark fur who hunt for insects under the cover of darkness. I enjoy running bat walks and events for children to help others discover how awesome these little winged mammals are. Whilst working as a Community Ranger, funded by the Heritage Lottery Fund over the last three years, I've been able to lead 12 bat related events for over 250 local people."

The ranger team at Yeovil Country Park host bat walks every year and a 'Nightime at Ninesprings' event aimed at families, where you can find out more about nocturnal wildlife, particularly bats. These events are held during the summer months as bats will shortly be going into hibernation for the winter. Look for our events listings for 2019 which will be published in January at www.southsomersetcountryside.com.

Councillor Sylvia Seal, Portfolio Holder for Leisure & Culture at South Somerset District Council said, "The volunteers were very pleased to discover two barbastelle bats, one of Britain's rarest mammals. It shows that all the hard work carried out by the rangers and volunteers to manage our woodland is making Yeovil Country Park a fabulous place for wildlife as well as people."

The Barbastelle and Nathusius Pipistrelle bats are recorded as 'very rare' across Somerset, with very few records. Their discovery in Yeovil Country Park will be recorded as they are a priority species under the Somerset Biodiversity Action Plan and all bats are protected species.

The Somerset and Dorset Bat group volunteers plan to return to do further surveys within Yeovil Country Park to discover more about the mammals.

Yeovil Country Park covers 157 acres on the South-east edge of Yeovil and is managed by a team of rangers and volunteers for recreation and wildlife.

There are over 890 species of invertebrates recorded at the site which are documented annually thanks to the dedication of the volunteers from the Yeovil Area Group of the Somerset Wildlife Trust and the Countryside Rangers. Find out more about wildlife at the range of District Council sites by visiting www.southsomersetcountryside.com. 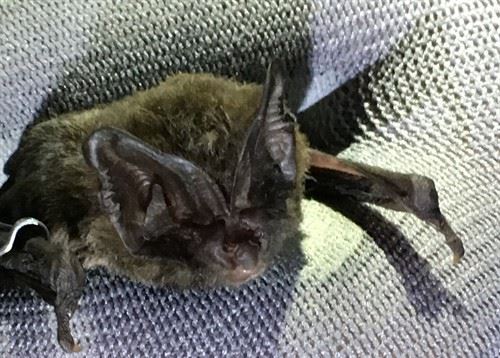 Above: The Barbastelle bat, one of Britain's rarest mammals.