The funding secured will enable the team to create, with the aid of a volunteer, a new WWI commemorative walking trail leaflet that takes you around Yeovil town centre.

In this centenary year of WWI, and in memory of the efforts and sacrifices made by the people of Yeovil, staff and volunteers at CHAC are creating a self-guided walking leaflet that helps people navigate around the points and features of interest and relevance in the town both pre, during and post WWI. Objects cared for at CHAC will feature in the accompanying leaflet and should help people understand more about Yeovil and the town's role in the War.

The project has been made possible by a £300 grant awarded by South West Museum Development using funds from Arts Council England. It would also not be possible without the time and donation of CHAC's volunteer team, particularly Ian Tasker, the design volunteer.

Councillor Nick Weeks, Portfolio Holder for Heritage at South Somerset District Council said, "We are delighted to secure the funding from SGBI and with our volunteers support we are looking forward to creating an important trail at this significant moment; in memory of those who fought in WWI. By creating a self-guided trail, we hope that many people will discover the often hidden history of our town, including schools, groups and individuals, learning about Yeovil's vital contribution during WWI".

Former local resident, Walter Horace Adams (Wally), features in the trail leaflet. Wally joined up to serve for his country in 1915 aged 16 and after serving a year, he survived the Battle of Jutland but died only a few days later aboard HMS Hampshire with Lord Kitchener when it was sunk off Orkney in 1916. The route around Yeovil leads you to the town centre war memorial where you can find the name Walter Horace Adams, and those of many others who lost their lives.

Find out more about Wally by visiting a temporary exhibition in the Town House over the winter months where objects will also be on show.

Free guided walks led by the CHAC team will take place in November. Further details and how to book will be released nearer the time or you can contact CHAC on heritage@southsomerset.gov.uk. 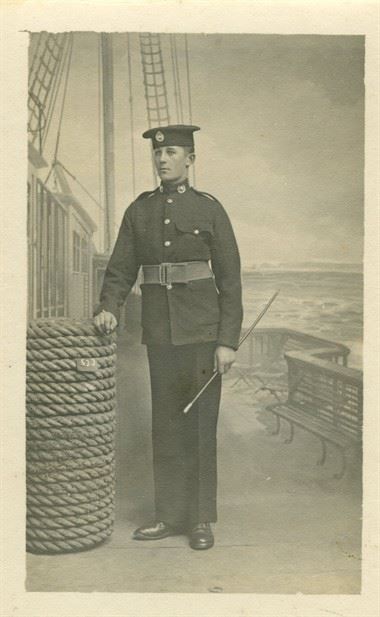 Above: Walter adams who features in the new commemorative walking trail leaflet around Yeovil town centre.